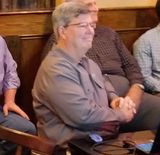 Richard Hogan: The Dream Endures When The Dreamer Doesn’t You may recall that AIAA Atlanta had the honor of hosting Richard Hogan, President of Commuter Craft LLC. at our October 2017 dinner meeting. Richard brought a 1/4 scale r/c/ model of the Innovator, a unique three-surface experimental category, kit plane that he was developing. He showed us flight test video of Ship1, the first prototype, that had first flown in September 2015. Then he discussed the design changes being implemented for Ship2, a larger, more comfortable, more accessible, version of Ship1 that still had the same ease of flight , performance and safety of flight design features. I was so impressed that when Richard offered me a job to work with him at Commuter Craft, I couldn’t say no!! And that was one notable characteristic of Richard: you didn’t work for him, you worked with him.

March 23, 2019, was  its 2nd and, tragically, its final flight. It was also the last flight for Richard Hogan who was the solo pilot on board. We’ll wait for the FAA and NTSB investigations to conclude to give us insight into what went wrong. Here are some links to articles about Commuter Craft and the crash and his eulogy. Commuter Craft is no more as a result of such a staggering loss.

Richard was among the smartest, nicest, most caring, most likable, most hardworking, most dedicated, most skilled, talented and capable people the world has ever known. I got to know Richard from hectic, sensory overload adventures to Sun’N’Fun, Oshkosh and the Calhoun, GA Airport Fly-in. Pulled a couple of all-nighters with Richard in order to get the plane ready!! The rest of us would be exhausted, but Richard’s work was never done. He was a dreamer and was fulfilling his childhood dream. Right up to the last moment.

Being involved in Richard’s dream was infectious and Richard inspired those around him to consider their dreams and how to achieve them. I am gratified that at the last lunch that we shared he made a point to tell me that he was my friend. Richard will be missed for a very, very long time by those who were fortunate enough to have known him. But, his inspiration as a dreamer will continue as long as anyone standing on the ground hears an airplane flying overhead or sees a red tail hawk soaring high above the tress and thinks “I wish that I were up there.”.

My dear friend Richard Hogan, you will be missed, but never forgotten.